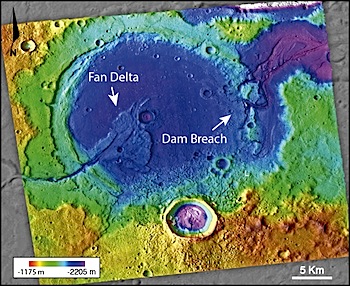 Planetary Geomorphology Image of the Month, March 31, 2016: Francesco Salese (Università D’Annunzio, Italy). Mars, is one of the planetary bodies where water flowed and where it may transiently flow today under certain conditions. Many martian paleodrainage systems and well-preserved fluvial and lacustrine deposits have been recognized and studied in the last two decades (see further reading).

Widespread dendritic valley networks and the presence of extensive fluvial features on ancient martian terrains suggest that a relatively “warm and wet” climate was prevalent early in the planet’s history (about 3.7 Ga). This is in stark contrast with the hyper-arid, extremely cold climate that is thought to have persisted from 3 Ga until the present (Amazonian Era).

The subject of this post is Moa Valles [Salese et al., 2016], which is a 2 billion year old paleodrainage system (Figure 1) that is nearly 300 km long and is carved into ancient highland terrains of Tempe Terra in the northern hemisphere of Mars. Understanding the origin and evolution of this type of complex and interconnected paleo-fluvio-lacustrine system is critical for understanding the early martian climate. [More at link]