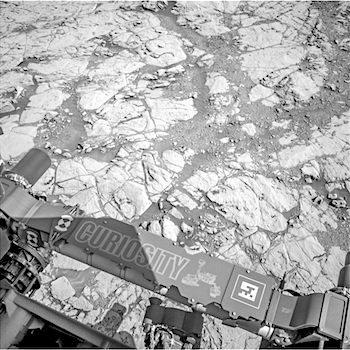 Sol 1824-26, September 22, 2017, update by MSL scientist Scott Guzewich: At times, it seems like fantasy that we have a nuclear-powered car exploring Mars and that I get to help that exploration, including today as the Science Operations Working Group Chair. But at other times, mundane reality creeps in to throw cold water on that. Such as happened yesterday when a network communications problem here on Earth resulted in yesterday’s Sol 1823 plan not being uplinked to Curiosity. That resulted in Curiosity performing a “runout” sol when only basic activities are performed.

But we picked up right where we left off yesterday and created a packed list of science activities to keep Curiosity busy over the weekend. We recovered the lost science on targets “Sherwood_Forest” and “Tableland” (both of which are just above the first letters in “Curiosity” in this image [above]), which includes ChemCam and Mastcam examinations of both and contact science on “Sherwood_Forest”. We added another fantasy-themed named target in “Troll_Valley” (just past the sandy spot above the Curiosity logo in that previous picture), which also will be examined by contact… [More at link]