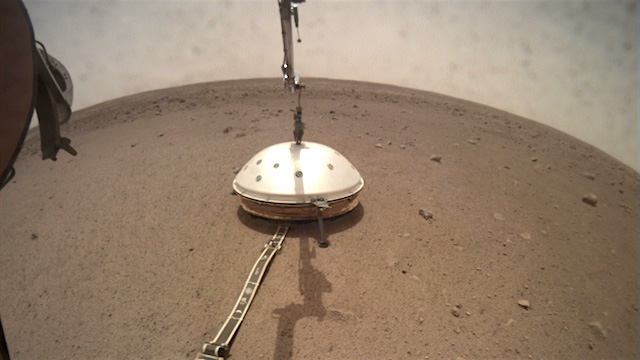 For the past several weeks, NASA’s InSight lander has been making adjustments to the seismometer it set on the Martian surface on Dec. 19. Now it’s reached another milestone by placing a domed shield over the seismometer to help the instrument collect accurate data. The seismometer will give scientists their first look at the deep interior of the Red Planet, helping them understand how it and other rocky planets are formed.

The Wind and Thermal Shield helps protect the supersensitive instrument from being shaken by passing winds, which can add “noise” to its data. The dome’s aerodynamic shape causes the wind to press it toward the planet’s surface, ensuring it won’t flip over. A skirt made of chain mail and thermal blankets rings the bottom, allowing it to settle easily over any rocks, though there are few at InSight’s location.

An even bigger concern for InSight’s seismometer — called the Seismic Experiment for Interior Structure (SEIS) — is temperature change, which can expand and contract metal springs and other parts inside the seismometer. Where InSight landed, temperatures fluctuate by about 170 degrees Fahrenheit (94 degrees Celsius) over the course of a Martian day, or sol.

“Temperature is one of our biggest bugaboos,” said InSight Principal Investigator Bruce Banerdt of NASA’s Jet Propulsion Laboratory in Pasadena, California. JPL leads the InSight mission and built the Wind and Thermal Shield. “Think of the shield as putting a cozy over your food on a table. It keeps SEIS from warming up too much during the day or cooling off too much at night. In general, we want to keep the temperature as steady as possible.”  [More at link]