Red Planet Report is on hiatus

While the Red Planet Report is on hiatus, these links will help readers stay abreast of developments in Mars exploration. (NB: Some links are updated daily, others at longer intervals.)

In addition, be sure to check out the links in the column at right.

Posted in Reports | Comments Off 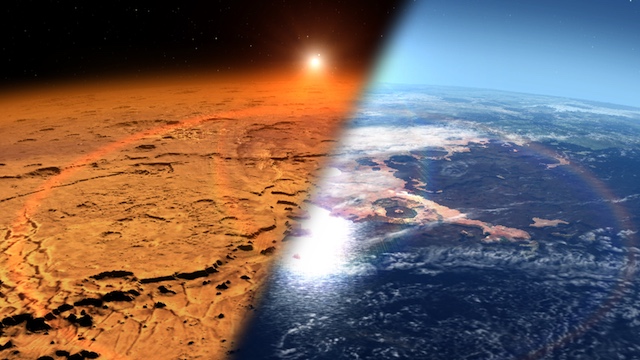 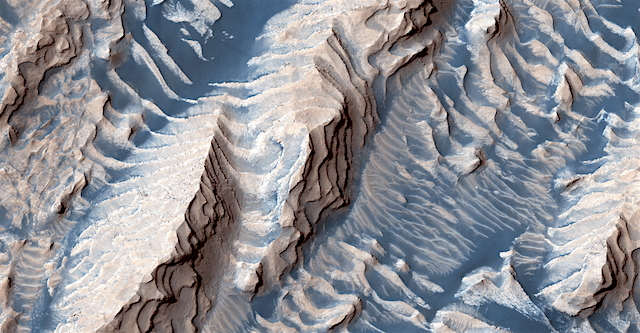 This image shows sedimentary rock and sand within Danielson Crater, an impact crater 67 kilometers in diameter, located in the southwest Arabia Terra region of Mars.

The rock was formed millions or billions of years ago when loose sediments settled into the crater, one layer at a time, and were later cemented in place. Cyclical variations in the sediment properties made some layers more resistant to erosion than others. After eons, these tougher layers protrude outward like stair steps. Across these steps, the winds have scattered sand (typically appearing darker and less red, i.e. “bluer” in contrast-enhanced color), giving rise to the zebra stripe-like patterns visible here.

This image completes a stereo pair over this location, which will allow measurement of the thicknesses of these sedimentary layers. The layer thicknesses and how they vary through time can provide some insight into the processes, possibly linked to ancient climate, that deposited the layers so long ago. [More at link]

THEMIS Image of the Day, September 6, 2019. This VIS image shows part of Chryse Chaos near the terminal end of the huge outflow channels draining from Valles Marineris into the Chyrse Basin.

Chaos terrain is also found along the course of most of channels in this region and may occur where the channel flow fluid warms the subsurface ice creating additional release points for melted subsurface ice. The chaos terrain in this image still retain the classic steep sided large mesas. 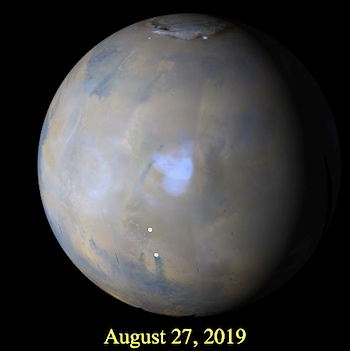 This image of a crater rim strikingly shows what appear to be bright white flows coming from gullies in the crater wall. However, HiRISE has been watching these gullies for some time (going all the way back to our first observation in 2012) and the flow features have been there for years. The new aspect is the bright white coloration, which is frost.

This is the earliest in the springtime that this area has been observed, and just like some winter mornings here on Earth, the conditions on Mars can be just right for frost to form. The interesting thing is that the frost appears on the gully deposits and not as much on the surrounding rock, indicating the physical properties of the gully deposits are different. [More at link]

THEMIS Image of the Day, September 5, 2019. Located in Margaritifer Terra, Morava Valles is one of several channels that empty northward towards Chryse Planitia. 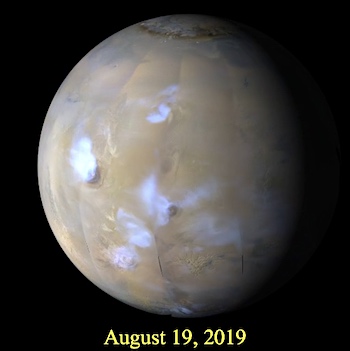 Afternoon weather conditions were again very seasonal this past week. Local dust storms were observed along the seasonal receding north polar cap edge and at southern low-to-mid latitudes. The developing aphelion cloud belt continued to be prominent at equatorial latitudes. Both the Curiosity Rover in Gale Crater and the InSight lander on Elysium Planitia had storm-free skies all week. [More at link, including video]

This image of the Nili Fossae region, to the west of the great Isidis basin, shows layered bedrock with many impact craters.

Nili Fossae is one of the most mineralogically important sites on Mars. Remote observations by the infrared spectrometer onboard MRO (called CRISM) suggest the layers in the ancient craters contain clays, carbonates, and iron oxides, perhaps due to hydrothermal alteration of the crust. However, the impact craters have been degraded by many millions of years of erosion so the original sedimentary, impact ejecta, or lava flows are hard to distinguish.

The bright linear features are sand dunes, also known as “transverse aeolian dunes,” because the wind direction is at ninety degrees to their elongated orientation. This shows that the erosion of Nili Fossae continues to the present day with sand-sized particles broken off from the local rocks mobilized within the dunes. [More at link]

THEMIS Image of the Day, September 4, 2019. Today’s VIS image shows part of Olympia Undae, the largest of several dune fields that encircle the north polar cap. (It is also known as the north polar sand sea.) This image was collected in the spring season.