‘Mars One’ colony not feasible: MIT 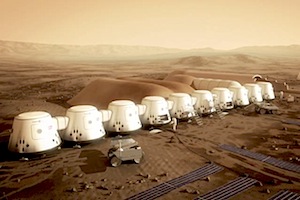 In 2012, the “Mars One” project, led by a Dutch nonprofit, announced plans to establish the first human colony on the Red Planet by 2025. The mission would initially send four astronauts on a one-way trip to Mars, where they would spend the rest of their lives building the first permanent human settlement…. But engineers at MIT say the project may have to take a step back, at least to reconsider the mission’s technical feasibility. The MIT researchers developed a detailed settlement-analysis tool to assess the feasibility of the Mars One mission, and found that new technologies will be needed to keep humans alive… [More at link]

This entry was posted in Reports and tagged human spaceflight, Mars colonies, Mars One. Bookmark the permalink.