Numerous places on Mars show erosion by precipitation, whether as rainfall or runoff from melting snow. The precipitation could have come from a thicker atmosphere or a temporary boost in atmospheric temperature and density following a large impact. Both scenarios would generate global precipitation effects. 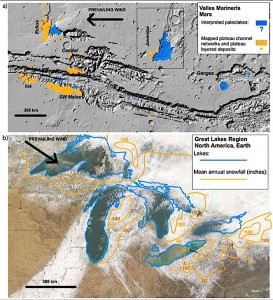 LAKE EFFECT SNOWSTORMS. Transient lakes on Mars should have generated snowbelts like those that lie downwind of the Great Lakes in North America. (Image is Figure 1 from the paper.)

But looking toward more local scales, a group of researchers led by Edwin Kite (University of California, Berkeley) studied what happens after an outburst of water produces a transient lake in a small area, such as a chaos region. These are places where large amounts of subsurface water burst out through cracks in the ground, then flow away or evaporate.

Focusing largely on Juventae Chasma and Echus Chasma near Valles Marineris, they write in the Journal of Geophysical Research (October 11, 2011), “Local precipitation is an attractive explanation for the 3-billion-year-old valleys in layered deposits on the plateaus around Valles Marineris.” These channels, the researchers explain, “Formed after the sharp decline in global erosion rates and channel formation around 3.7 billion years ago.”

Using current models for atmospheric circulation and behavior, they calculate that in the case of a lake in Juventae, rapid updrafts would carry water vapor about 35 kilometers (22 miles) high.

“More than 80 percent of the vapor released by the lake is trapped in or next to the lake as snow,” they explain. Snow that did not fall back into the lake drifted southwest on prevailing winds to collect on the plateau next to Juventae. The runoff as the snow melted then carved valleys in the plateau deposits.

The team acknowledges that an atmospheric state like the present could not melt the snow given the Sun’s fainter luminance 3 billion years ago. “To erode channels from snowmelt,” they say, “requires a change in background atmospheric state, or transient heating from impact ejecta, or geothermal activity. Without transient heating, either the atmospheric pressure would need to be at least 10 times greater or have extra greenhouse warming (or both).”