Gullies and ice on Mars 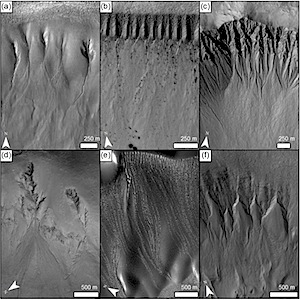 Gullies on Mars were first discovered in 2000 (Malin and Edgett, 2000) in images taken by the Mars Orbiter Camera on board NASA’s Mars Global Surveyor platform. They are kilometre-scale features and have a striking resemblance to water-carved gullies on Earth. Martian gullies have few superposed impact craters and are thought to have occurred in the last few millions of years (e.g., Johnsson et al., 2014), with some modifications of their morphology having occurred in the last few decades (e.g., Dundas et al., 2014). Gullies are concentrated at the mid-latitudes and are found most commonly on steep (>20°) pole-facing slopes, including crater walls… [More at link]

This entry was posted in Reports and tagged geomorphology, gullies, ice, mass wasting. Bookmark the permalink.