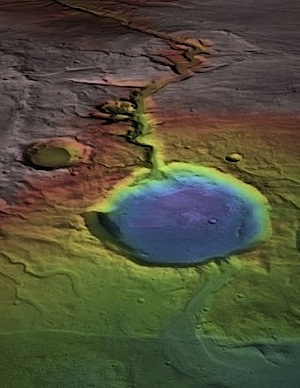 How to reconcile indisputable evidence of flowing water on Mars with severely low temperatures? New research shows volcanism and greenhouse gas could have warmed the planet sufficiently, but only for tens or hundreds of years at a time. Ample evidence of ancient rivers, streams, and lakes make it clear that Mars was at some point warm enough for liquid water to flow on its surface. While that may conjure up images of a tropical Martian paradise, new research published in Nature Geoscience throws a bit of cold water on that notion.

The study, by scientists from Brown University and Israel’s Weizmann Institute of Science, suggests that warmth and water flow on ancient Mars were probably episodic, related to brief periods of volcanic activity that spewed tons of greenhouse-inducing sulfur dioxide gas into the atmosphere. The work, which combines the effect of volcanism with the latest climate models of early Mars, suggests that periods of temperatures warm enough for water to flow likely lasted for only tens or hundreds of years at a time.  [More at links]