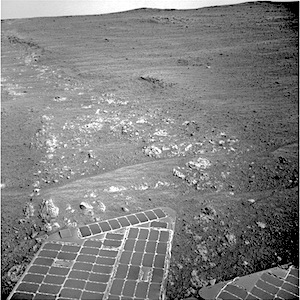 December 3, 2014: Opportunity roves from Wdowiak Ridge into network of fractures. As a large, threatening regional dust storm blowing across the southern hemisphere of Mars continued to degrade and the skies over Endeavour Crater began to clear, veteran Mars Exploration Rover (MER) Opportunity successfully departed Wdowiak Ridge in November, maneuvering carefully through the rocky terrain around Ulysses Crater and getting back on the route south to the next major science attraction. But after logging her 41st kilometer, the Earth’s longest-lived and most traveled robot on another planet drove into a network of fractures the likes of which the scientists had never seen before on Mars and wound up working there through the end of the month – and then something not completely unexpected happened… [More at link]