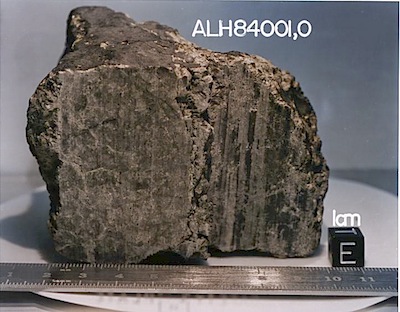 A new analysis of a Martian rock that meteorite hunters plucked from an Antarctic ice field 30 years ago this month reveals a record of the planet’s climate billions of years ago, back when water likely washed across its surface and any life that ever formed there might have emerged. Scientists from the University of California, San Diego, NASA and the Smithsonian Institution report detailed measurements of minerals within the meteorite in the early online edition of the Proceedings of the National Academy of Sciences this week.

“Minerals within the meteorite hold a snapshot of the planet’s ancient chemistry, of interactions between water and atmosphere,” said Robina Shaheen, a project scientist at UC San Diego and the lead author of the report. [More at links]