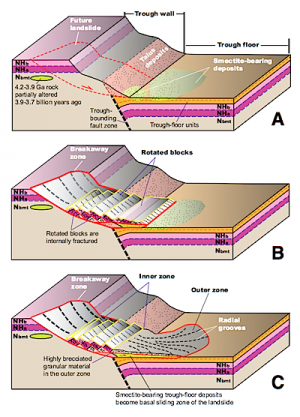 Beds of clays and hydrated silicate minerals on the floor of Valles Marineris made it easy for landslides there to flow long distances, according to a new paper published online in Geology. The work, done by a team of scientists led by Jessice Watkins (University of California Los Angeles), used spectral data to identify clay mineral deposits in Valles Marineris. The results suggest that these facilitated landslides by making the base of the sliding zones more slippery.

This new finding, they say, supports the interpretation of other scientists that the nearly continuous occurrence of Valles Marineris landslides from 3.5 billion years ago through 50 million years ago has been independent of changing climate conditions. It also says that although hydrated silicate minerals were created as water interacted with rocks mostly in the Noachian (4.1 to 3.7 billion years ago), the effects of that early water activity have been long lasting, with clay minerals influencing landscape-shaping processes even at present.