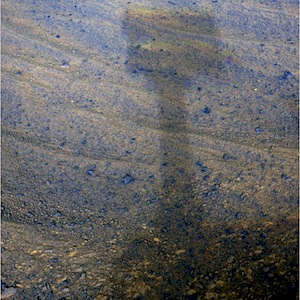 January 7, 2015: Opportunity Closes in on 11th Anniversary and We Look Back on 2014. With a wonder year of discoveries, historic feats, and bummers in the rear view mirror – and plenty of mettle to continue exploring – Opportunity ended 2014 quietly working in a temporary back-up mode, as her Mars Exploration Rover (MER) colleagues on Earth ramped up for the mission’s marathon adventure to come in 2015.

The veteran robot field geologist has been studying different segments of the eroded western rim of Endeavour Crater since August 2011, when she pulled into Spirit Point at Cape York. The impact crater, located in Meridiani Planum, is huge, 22 kilometers (about 13.67 miles) wide and dates back to the Noachian Period some 4 billion years ago, a time when scientists believe Mars was warmer and more like Earth, with abundant water and erupting volcanoes. Roving from site to site along the rim, Opportunity has uncovered more and more evidence of past water that bolsters that theory… [More at link]