Scientists with the Mars Exploration Rover Opportunity have given the name of Shoemaker Ridge to the highest “spine” of the Cape York segment of Endeavour Crater’s rim. The rover arrived at Cape York in early August and has been exploring this 3-meter (10 foot) high remnant of the crater’s original rim. 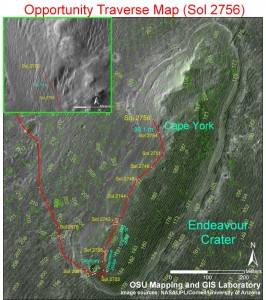 HEIGHT OF LAND. Cape York is a heavily eroded segment of the rim of Endeavour Crater, a 22-kilometer (14 mile) wide impact crater. The high spine running down the length of Cape York has been named Shoemaker Ridge. Opportunity is currently near the north end of Cape York, finding a location to spend the coming Martian winter. (NASA/JPL/Cornell/University of Arizona image)

“We named the ridge to honor Eugene Shoemaker, in many ways the founder of our science,” says Ray Arvidson (Washington University). Arvidson, deputy principal investigator for the MER project, spoke at the fall meeting of the American Geophysical Union.

“Our plan,” he continues, “is to use the Shoemaker Ridge’s name in the formal identification of the impact breccia rock which Opportunity is exploring. It will be called the Shoemaker Formation.” Rules for naming geological formations forbid naming them for a person directly, and require a reference to a specific geographical feature where the rock unit is exposed.

Opportunity is settling down at the north end of Cape York for the coming Martian winter on a slope that inclines northward, to maximize solar power generation.

When Martian spring arrives, if the rover remains healthy, project scientists plan to turn it south and explore along the east-facing slope of Cape York, where they believe the impact breccia is best exposed.