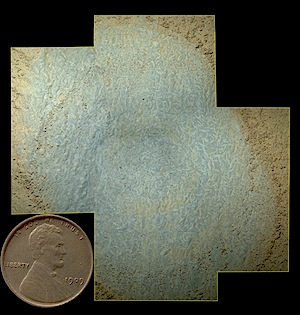 Sol 864-866, January 9, 2015, update from USGS Scientist Ryan Anderson: “The drive toward ‘Pink Cliffs’ went according to plan, so in the Sol 864 plan we will be doing a very short drive (called a bump) toward our drilling target: ‘Mojave’ (shown above). Before the drive, ChemCam will analyze 5 locations in a line across a possible mineral vein in the rock, at a target called ‘Harrisburg.’ This type of observation, called a raster, was quite common before ChemCam’s focus problems, but this will be the first time doing a 5-point raster since the focusing laser stopped…” [More at link]