Software upgrade, plus a salty story at ‘Mojave’? 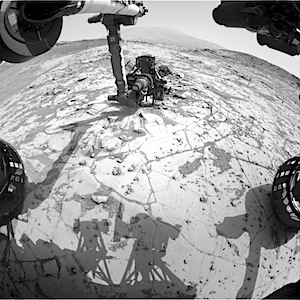 A rock target where NASA’s Curiosity Mars rover is using its sample-collection drill this week may have a salty story to tell. This target, called “Mojave,” displays copious slender features, slightly smaller than grains of rice, that appear to be mineral crystals. A chance to learn their composition prompted the Curiosity science team to choose Mojave as the next rock-drilling target for the 29-month-old mission investigating Mars’ Gale Crater. The features might be a salt mineral left behind when lakewater evaporated. This week, Curiosity is beginning a “mini-drill” test to assess the rock’s suitability for deeper drilling, which collects a sample for onboard laboratory analysis. A weeklong pause in science operations to install a new version of rover flight software is scheduled to begin early next week… [More at link]