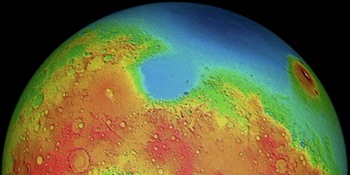 The two hemispheres of Mars are more different from any other planet in our solar system. Non-volcanic, flat lowlands characterise the northern hemisphere, while highlands punctuated by countless volcanoes extend across the southern hemisphere. Although theories and assumptions about the origin of this so-called and often-discussed Mars dichotomy abound, there are very few definitive answers. ETH Zurich geophysicists under Giovanni Leone are now providing a new explanation. Leone is the lead author of a paper recently published in the journal Geophysical Research Letters.

Using a computer model, the scientists have concluded that a large celestial object must have smashed into the Martian south pole in the early history of the Solar System. Their simulation shows that this impact generated so much energy that it created a magma ocean, which would have extended across what is today’s southern hemisphere. The celestial body that struck Mars must have been at least one-tenth the mass of Mars to be able to unleash enough energy to create this magma ocean. The molten rock eventually solidified into the mountainous highlands that today comprise the southern hemisphere of Mars… [More at links]