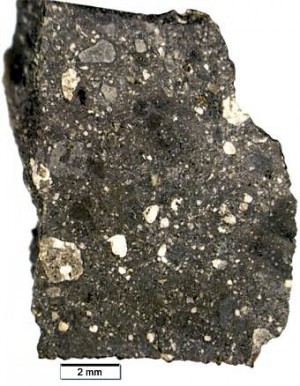 New spectroscopic analysis of “Black Beauty,” a meteorite found in the Moroccan desert, has given scientists a better picture of the crust beneath Mars’ red dust. The meteorite, also known as NWA 7034, is like no other rock ever found on Earth. It’s been shown to be a 4.4 billion-year-old chunk of the Martian crust, and according to a new analysis, rocks just like it may cover vast swaths of Mars.

In a new paper in press in the journal Icarus, by Kevin Cannon and Jack Mustard (Brown University) and Carl Agee (University of New Mexico), the scientists report that spectroscopic measurements of the meteorite are a spot-on match with orbital measurements of the Martian dark plains, areas where the planet’s coating of red dust is thin and the rocks beneath are exposed. The findings suggest that the meteorite, nicknamed Black Beauty, is representative of the “bulk background” of rocks on the Martian surface, says Cannon, a Brown University graduate student… [More at links]