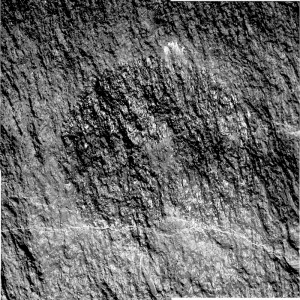 Sol 3950, March 5, 2015. Opportunity used its brush to clear dust from the unusual rock dubbed Sgt. Charles Floyd (after the quartermaster of the Lewis and Clark expedition). The brushed area appears as a slightly darker circle in the center of this four-frame composite made by the rover’s Microscopic Imager. (Click the image to open a larger version in a new tab.)

Mission scientists have paused to study a couple of unusual rocks — among them, Sgt. Charles Floyd and Jean Baptiste Charbonneau — at the head of Marathon Valley.