Did Tharsis change its volcanic style?

Volcanic activity on Mars tends toward an “effusive” eruption style: it produces many low-profile, broad-skirted volcanos. These are made with sheets of runny lavas that flow like warm motor oil for long distances, spilling over and around obstacles or burying them. Tharsis, home to the biggest volcano in the solar system, Olympus Mons, is a gigantic outdoor museum of this volcanic style. 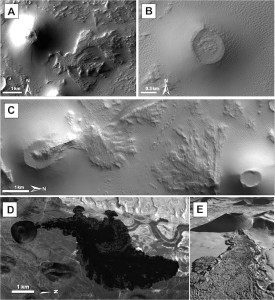 CINDER CONES IN THARSIS. Images A, B, and C show cinder cones with short, blocky lava flows in the Tharsis volcanic field on Mars. Images D and E show two views of SP Crater, a 70,000-year-old cone in the San Francisco volcanic field near Flagstaff, Arizona. (Image is Figure 3 in the paper.)

By contrast, evidence is relatively rare on Mars for explosive (“pyroclastic”) eruptions, which typically build small, steep-sided cinder cones that give birth to lava flows that are stiff, blocky, and short.

Yet within Tharsis, scientists Petr Broz (Academy of Sciences of the Czech Republic) and Ernst Hauber (DLR, Berlin) have found a small volcanic field dotted with pyroclastic cones. More intriguing, it is slightly elevated over its surroundings. This meant the area escaped being flooded by the usual kind of Tharsis lava flows and thus it preserves a remnant of an earlier eruption style.

“The cone field is superposed on an old, elevated window of fractured crust which survived flooding by younger lava flows,” they explain in their report, published in Icarus.

The cinder cone field lies on the southeast edge of Ulysses Fossae, a fault system several hundred kilometers long, that lies north of two large volcanos, Biblis Patera and Ulysses Patera. The cinder cones clearly align along the fractures, and likely erupted when the faults cracked and opened.

The researchers note that because of the cinder cones’ small size, their age is hard to pin down, but they estimate they formed between 440 million and 1.5 billion years ago. The scientists add that due to heavy coatings of dust, which is common in Tharsis, the individual cinder cones unfortunately display too few details to sort them into an age sequence.

Broz and Hauber remark, “It’s surprising that this is the only well-preserved cinder cone field of this kind seen so far on Mars, given that pyroclastic cones are the most common volcanos on Earth.” One explanation, they note, is that these fields may have been more numerous long ago on Mars.

“It seems possible that a more explosive eruption style was common in the past,” they say, “And that the widespread effusive plains-style volcanism in the Late Amazonian has buried much of its morphological evidence in Tharsis.”