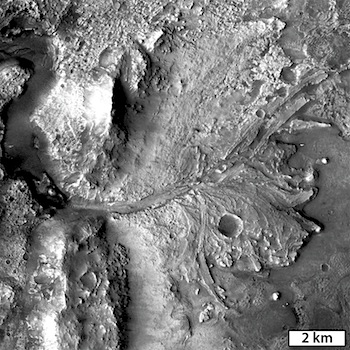 Researchers from Brown University have completed a new analysis of an ancient Martian lake system in Jezero Crater, near the planet’s equator. The study finds that the onslaught of water that filled the crater was one of at least two separate periods of water activity in the region surrounding Jezero.

“We can say that this one really well-exposed location makes a strong case for at least two periods of water-related activity in Mars’ history,” said Tim Goudge, a graduate student at Brown who led the work. “That tells us something really interesting about how early Mars operated.” The study is in press in the Journal of Geophysical Research: Planets.

The ancient lake at Jezero crater was first identified in 2005 by Caleb Fassett, a former Brown graduate student now a professor at Mount Holyoke College. Fassett identified two channels on the northern and western sides of the crater that appear to have supplied it with water. That water eventually overtopped the crater wall on the southern side and flowed out through a third large channel. It’s not clear how long the system was active, but seems to have dried out around 3.5 to 3.8 billion years ago. [More at links]