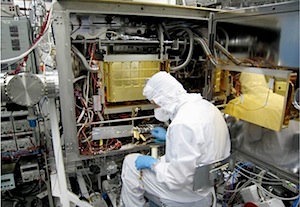 NASA’s Curiosity rover is using a new experiment to better understand the history of the Martian atmosphere by analyzing xenon. While NASA’s Curiosity rover concluded its detailed examination of the rock layers of the “Pahrump Hills” in Gale Crater on Mars this winter, some members of the rover team were busy analyzing the Martian atmosphere for xenon, a heavy noble gas.

Curiosity’s Sample Analysis at Mars (SAM) experiment analyzed xenon in the planet’s atmosphere. Since noble gases are chemically inert and do not react with other substances in the air or on the ground, they are excellent tracers of the history of the atmosphere. Xenon is present in the Martian atmosphere at a challengingly low quantity and can be directly measured only with on-site experiments such as SAM.

“Xenon is a fundamental measurement to make on a planet such as Mars or Venus, since it provides essential information to understand the early history of these planets and why they turned out so differently from Earth,” said Melissa Trainer, one of the scientists analyzing the SAM data. [...]

SAM previously measured the ratio of two isotopes of a different noble gas, argon. The results pointed to continuous loss over time of much of the original atmosphere of Mars. [More at link]