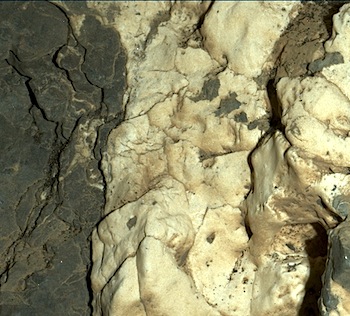 Two-tone mineral veins at a site NASA’s Curiosity rover has reached by climbing a layered Martian mountain offer clues about multiple episodes of fluid movement. These episodes occurred later than the wet environmental conditions that formed lake-bed deposits the rover examined at the mountain’s base. [...]

The two-tone veins are at the site called “Garden City.” They appear as a network of ridges left standing above the now eroded-away bedrock in which they formed. Individual ridges range up to about 2.5 inches (6 centimeters) high and half that in width, and they bear both bright and dark material.

“Some of them look like ice-cream sandwiches: dark on both edges and white in the middle,” said Linda Kah, a Curiosity science-team member at the University of Tennessee, Knoxville. “These materials tell us about secondary fluids that were transported through the region after the host rock formed.” [More at link]