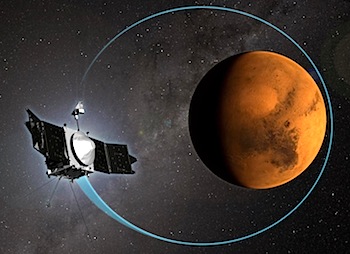 MAVEN completed 1,000 orbits around the Red Planet on April 6, four-and-a-half months into its one-year primary mission. MAVEN is in its science-mapping orbit and has been taking data since the start of its primary mission on Nov. 16, 2014. The furthest point in the spacecraft’s elliptical orbit has been 6,500 kilometers (4,039 miles) and the closest 130 kilometers (81 miles) above the Martian surface.

“The spacecraft and instruments continue to work well, and we’re building up a picture of the structure and composition of the upper atmosphere, of the processes that control its behavior, and of how loss of gas to space occurs,” said Bruce Jakosky, MAVEN’s principal investigator from the University of Colorado’s Laboratory for Atmospheric and Space Physics in Boulder. [More at link]