CubeSats will accompany InSight to Mars 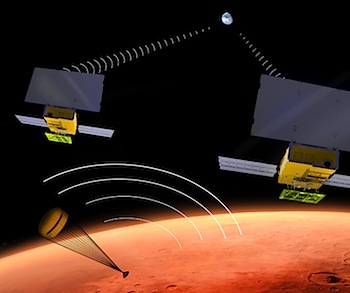 When NASA launches its next mission on the journey to Mars — a stationary lander in 2016 — the flight will include two CubeSats. This will be the first time CubeSats have flown in deep space. If this flyby demonstration is successful, the technology will provide NASA the ability to quickly transmit status information about the main spacecraft after it lands on Mars.

The twin communications-relay CubeSats, being built by NASA’s Jet Propulsion Laboratory, Pasadena, California, constitute a technology demonstration called Mars Cube One (MarCO). CubeSats are a class of spacecraft based on a standardized small size and modular use of off-the-shelf technologies. Many have been made by university students, and dozens have been launched into Earth orbit using extra payload mass available on launches of larger spacecraft… [More at link]