Medium-size craters less than 3 billion years old often show water-carved channels in their debris aprons, according to a new study of mid-latitude craters in Arabia Terra. Previous studies had reported that such features on ejecta aprons were rare. 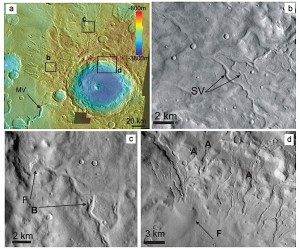 THE CERULLI CRATER IMPACT obliterated part of Mamers Vallis, but fluvial activity and landforms appear on both the debris apron around the crater and on the crater's inside walls. (Image is Figure 1 from the paper.)

Nicolas Mangold (Université de Nantes, France) writes in Planetary and Space Science that 27 craters (out of 204 studied) show water-carved channels on their ejecta blankets. He notes that these fluvial landforms appeared with craters larger than 12 km (7.5 miles) in diameter; they also appeared on the inner rims of a few craters larger than 90 km (56 mi) in diameter.

“A process of shallow ice melted below warm ejecta can explain most of these observations,” Mangold notes, adding that snow deposits and subsequent melting, as well as impact-caused hydrothermal activity may be associated with this process, especially for the largest craters.

The study used images taken with the High Resolution Stereo Camera (HRSC) on Mars Express and the Context Camera (CTX) on the Mars Reconnaissance Orbiter.

Mangold adds, “Crater counts suggest fluvial activity was scattered from the Early Hesperian to the Middle Amazonian. So these landforms on preserved ejecta blankets can be used as a new way of determining when water was available on Mars.”