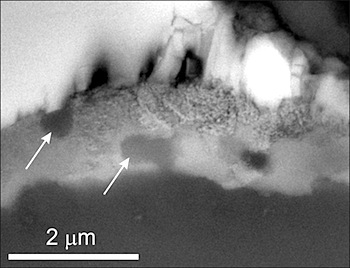 for the first time direct physical evidence of the existence of opals on Mars. The traces of the precious stone, which were found in a Martian meteorite, could help future exploration missions decide where to look for evidence of life on the red planet.

University of Glasgow researchers discovered the opal in a 1.7-gram fraction of the Martian meteorite known as Nakhla, which was supplied by the Natural History Museum in London. Nakhla is named after the town in Egypt where it fell to Earth in 1911, millions of years after being blasted from the face of Mars by a massive impact of unknown origin.

In a new paper published in the journal Meteoritics and Planetary Science, the team describes how they identified traces of the gem known on Earth as ‘fire opal’ for its brilliant orange, yellow and red colouration. Using a powerful scanning electron microscope in the University’s School of Physics and Astronomy, the team found very small traces of the gem in the rock created by the interaction of Martian water with silica within the meteorite.

Professor Martin Lee, of the University’s School of Geographical and Earth Sciences, is lead author of the research paper. He said: “The slice of Nakhla that we have is small, and the amount of fire opal we’ve found in it is even smaller, but our discovery of opal is significant for a couple of reasons.” [More at links]

This entry was posted in Reports and tagged Mars meteorites, Nakhla, opal. Bookmark the permalink.