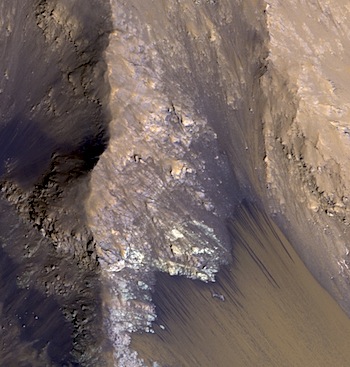 Ten years after launch, NASA’s Mars Reconnaissance Orbiter (MRO) has revealed the Red Planet’s diversity and activity, returning more data about Mars every week than all six other missions currently active there. And its work is far from over.

The workhorse orbiter now plays a key role in NASA’s Journey to Mars planning. Images from the orbiter, revealing details as small as a desk, aid the analysis of potential landing sites for the 2016 InSight lander and Mars 2020 rover. Data from the orbiter will also be used as part of NASA’s newly announced process to examine and select candidate sites where humans will first explore the Martian surface in the 2030s.

An Atlas V rocket launched the orbiter on an early Florida morning from Cape Canaveral Air Force Station on Aug. 12, 2005, propelling it on a course toward Mars. [More at link]

This entry was posted in Reports and tagged Mars Reconnaissance Orbiter, MRO, NASA. Bookmark the permalink.