The basic plan for an initial manned mission to Mars, including a landing, calls for a flight lasting about 430 days. While the mission would involve obvious dangers, among these — but often overlooked — are the risks posed by energetic natural radiation. 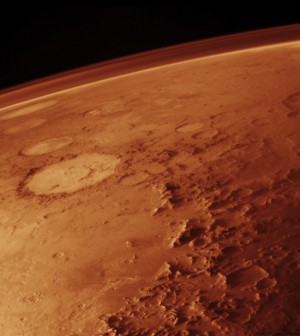 RUNNING INTERFERENCE. An astronaut standing on the surface of Mars would be exposed to only half the galactic high energy radiation, thanks the blocking effect of the planet. Even the atmosphere helps shield a little. (NASA image)

According to a team of researchers led by Susan McKenna-Lawlor (Space Technology Ireland), these risks are significant. Writing in the journal Planetary and Space Science, they say that although there are ways to mitigate the risks, “the health problem posed by energetic particle radiation [for a human trip to Mars] is presently unresolved.”

Tallying the sources of natural particle radiation faced by a Mars-bound crew, the scientists list passing twice through Earth’s Van Allen radiation belts, cosmic rays from sources in the Milky Way Galaxy, and events such as flares where the Sun emits blasts of energetic particles.

The researchers considered three strawman flight plans developed by NASA: a Mars swingby flight with no landing, a flight with a surface stay of 30 days, and a long-stay version that spends 600 days (most of one Mars year) on the surface. These flights had durations lasting 600 days, 430 days, and 1,000 days, respectively. (The flight plan, celestial mechanics, and the orbits of Earth and Mars govern the durations.)

In regard to the Van Allen belts, experience from Apollos 8 and 10 through 17, which transited them going to and coming from the Moon, shows that they pose little difficulty.

The cruise to Mars and the stay on the surface last much longer, however, and both expose the crew to energetic particles from galactic cosmic rays and from the Sun. These are not negligible, according to the team.

Cosmic rays are the nuclei of chemical elements accelerated to very high energies outside the solar system. At solar maximum more solar particles and interplanetary magnetic fields interact with incoming cosmic rays and remove lower energy particles. This operates conversely as well — the most recent solar minimum produced, in 2009, the highest cosmic ray dose in the last 25 years.

Unlike solar activity cycles, however, solar flares occur unpredictably, though they are more common, stronger, and thus more dangerous around the high points of each cycle. Yet the researchers note that it can’t be assumed these particle events will not occur at solar minimum also.

One saving grace: the rocky bulk of Mars shields a person standing on the surface from half the radiation that would strike that person while in transit to or from Earth.

So how much radiation would be likely? The team says, “The dose incurred during a 400-day Cruise Phase due to galactic cosmic radiation is estimated to be hazardous.” They add that the amount would approach the radiation dose that NASA allows space personnel to accumulate over an entire career.

Choosing the low spots in a solar cycle offers no guarantees, either: “It cannot be excluded, whether a manned mission takes place under solar minimum or solar maximum conditions, that a particle associated flare…might take place during the transit to/from Mars.” Such events at present are simply unpredictable.

Finally, the scientists say, “The occurrence during the mission Cruise Phase of a major solar energetic particle event characterized by [high energies] could deliver a lethal dose of radiation.”