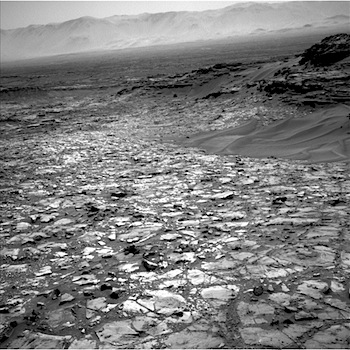 Sol 1108, September 17, 2015, update from USGS scientist Ken Herkenhoff: The 16.6-meter drive planned for Sol 1107 completed as planned, placing the rover in front of the bright outcrop of interest.  As expected, only a few post-drive images were received in time for Sol 1108 planning, which made it more difficult than usual to pick targets for remote sensing observations and driving.  However, we found some bright blocks that the Rover Planners confirmed would be good targets for contact science, and… [More at link]