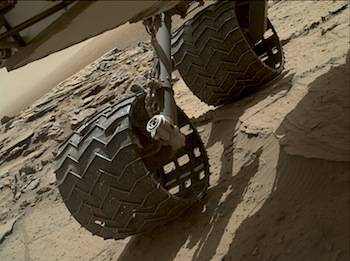 Sol 1128, October 8, 2015, update from USGS scientist Ken Herkenhoff: got up before dawn again today, and was treated to a beautiful view of the crescent Moon, Venus, Mars, and Jupiter in the eastern sky. I hadn’t seen Mars since it emerged from behind the Sun following solar conjunction last June (it was cloudy yesterday morning), and its dimness reminded me of how far away Mars is right now: 351 million kilometers or 218 million miles. It takes 20 minutes for commands sent from Earth to get to MSL, at the speed of light, and another 20 minutes for data to be sent back from Mars to Earth. We’ve gotten used to communicating with the rover over such great distances, but it’s amazing that the link has been so reliable.