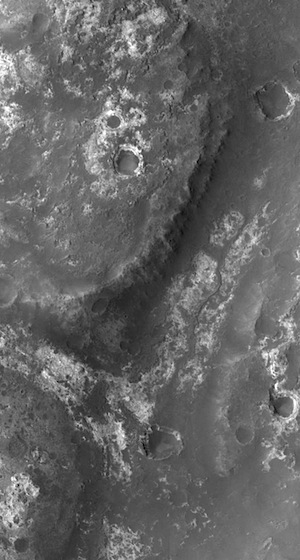 Today’s image shows part of Mawrth Vallis, a channel carved by giant floods billions of years ago. The highlands lying to the south and west of the channel are under consideration as a potential landing site for NASA’s Mars 2020 rover. Remote-sensing observations from orbit show widespread exposures of clay minerals, indicating alteration by water early in Martian history. These might preserve traces of ancient life, if there was any.

For astronaut Mark Watney, driving in a pressurized and solar-powered rover vehicle, Mawrth Vallis offers a gentle slope and an easy-to-follow route up from Acidalia’s low-lying plains into the Arabia Terra highlands. At this point in his journey to Schiaparelli Crater, he has driven about 750 kilometers (470 miles).