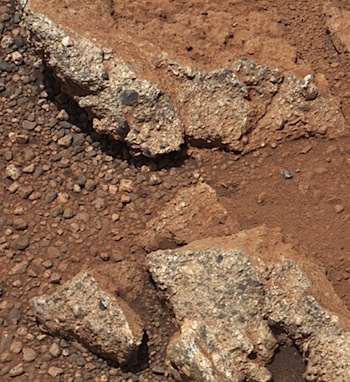 Rounded pebbles on Mars were transported for tens of kilometres in a river, suggests a new study published in Nature Communications [October 13, 2015]. This study makes use of a new technique that may help estimate the distance travelled by pebbles and small particles on other planets.

The discovery by the robotic rover Curiosity of small rounded pebbles in rock formations on Mars suggested that there were streams or rivers flowing on our neighbouring planet in the past, but interpretations regarding these have been uncertain. Reconstructions have suggested that the pebbles became rounded as they rolled, slid and hopped along a river bed, but how far they travelled has not been quantified. Pebble shape can be used to infer the amount of mass lost during particle transport by water, and this mass loss equates to the amount of transport experienced by the pebble.

Douglas Jerolmack [University of Pennsylvania] and colleagues used experiments as well as investigations of river-transported pebbles in Puerto Rico and the USA to show that the distance travelled by a pebble can be estimated using shape alone. They validated their model on Earth before using it to interpret the pebbles found in the Martian rock formations. [More at link]