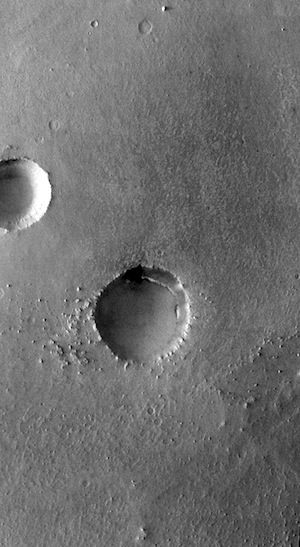 Today’s image shows a part of the flat terrain of northern Meridiani Planum. This area lies about 300 kilometers (190 miles) north of where Mars rover Opportunity is currently exploring the rim rocks of Endeavour Crater. Meridiani is a large expanse of sedimentary rock, mostly flat-lying basalt sandstone with hematite nodules (“blueberries”) embedded in it. Farther south from this scene, Opportunity has examined several craters like these that expose deeper rock layers. They show that the Meridiani sandstone is made of dune sands that were soaked in sulfur-rich water.

Flat terrain may make for dull scenery, but the driving is easy. This area is where astronaut Mark Watney turns his vehicle east toward Schiaparelli Crater. Before arriving here, he was driving south to get out from under a dust storm that threatened to shut off power to the vehicle’s solar cells. At this point he has journeyed about 2,300 kilometers (1,400 miles) from Acidalia.