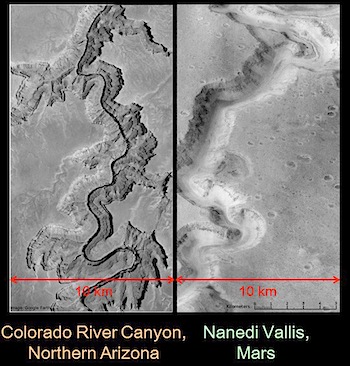 The extensive valley networks on the surface of Mars were probably created by running water billions of years ago, but the source of that water is unknown. Now, a team of Penn State and NASA researchers is using climate models to predict how greenhouse warming could be the source of the water.

[Their study, “Testing the early Mars H2–CO2 greenhouse hypothesis with a 1-D photochemical model,” was published in Icarus.]

“Everyone is looking for life on Mars, and if Mars was habitable early on as indicated by flowing water, then the chances of there being some sort of life there now goes up,” said Natasha Batalha, lead author and graduate student in astronomy and astrophysics, Penn State. “Our work involves using models to best estimate what was happening on the surface of Mars 3.8 billion years ago.” [More at links]