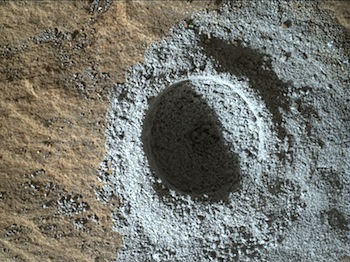 Sol 1135, October 15, 2015, update from USGS scientist Lauren Edgar: The Sol 1134 mini-start hole on “Pilgrim” went well, as seen in the MAHLI image [at right].  Side note: if that doesn’t look like a hole to you, try rotating the image (the hole is illuminated from the lower left, but the human eye generally prefers to see sunlight coming from the upper half of the image).

Due to power restrictions, we’re waiting until the weekend plan to go for the full drill hole, but that means that today there’s time for a SAM atmospheric observation and a targeted science block.  The goal of the SAM activity is to look for methane, one Mars year after the previous high detections.  So we’ll let SAM take a big whiff to see if we can detect anything.  I was on duty as GSTL today… [More at link]