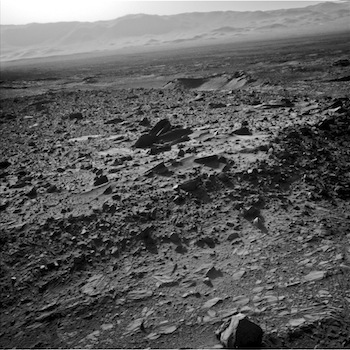 Sol 1160-61, November 9, 2015, update from USGS scientist Ken Herkenhoff: The 68-meter drive planned for Sol 1158 completed as planned, placing the rover near a dark, circular feature named “Brandberg.”  The tactical operations team studied the images of Brandberg and discussed the value of contact science observations in this area, ultimately deciding to drive on toward the Bagnold Dunes. But before leaving, ChemCam and Mastcam will observe targets “Hoba” and “Gibeon” on the Brandberg feature… [More at link]