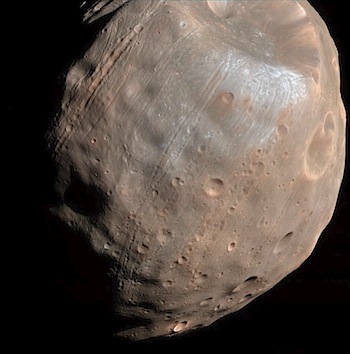 The long, shallow grooves lining the surface of Phobos are likely early signs of the structural failure that will ultimately destroy this moon of Mars.

Orbiting a mere 3,700 miles (6,000 kilometers) above the surface of Mars, Phobos is closer to its planet than any other moon in the solar system. Mars’ gravity is drawing in Phobos, the larger of its two moons, by about 6.6 feet (2 meters) every hundred years. Scientists expect the moon to be pulled apart in 30 to 50 million years.

“We think that Phobos has already started to fail, and the first sign of this failure is the production of these grooves,” said Terry Hurford of NASA’s Goddard Space Flight Center in Greenbelt, Maryland.

The findings by Hurford and his colleagues are being presented Nov. 10, 2015, at the annual Meeting of the Division of Planetary Sciences of the American Astronomical Society at National Harbor, Maryland.

Phobos’ grooves were long thought to be fractures caused by the impact that formed Stickney crater. That collision was so powerful, it came close to shattering Phobos. However, scientists eventually determined that the grooves don’t radiate outward from the crater itself but from a focal point nearby.

More recently, researchers have proposed that the grooves may instead be produced by many smaller impacts of material ejected from Mars. But new modeling by Hurford and colleagues supports the view that the grooves are more like “stretch marks” that occur when Phobos gets deformed by tidal forces. [More at links]