Buried in the shallow soft mud of a dry California lake bed, a seismometer was able to detect the tiny tilts of the ground as it was pulled up by passing dust devils. The experiment, described online November 10 in the Bulletin of the Seismological Society of America, is one of the first reports of a seismic signature from a dust devil. 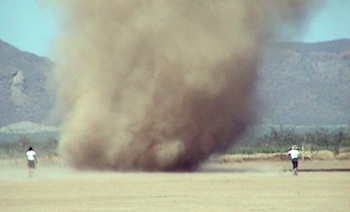 The study provides valuable information to researchers working on NASA’s InSight mission to Mars, which will deposit a similar seismometer on the Red Planet. InSight’s scientists hope the device will help them measure dust devils and their impact on the Martian atmosphere, according to Ralph Lorenz of Johns Hopkins University and colleagues. Scientists could also subtract the seismic noise created by dust devils from the seismometer’s overall readings as they look for evidence of “marsquakes.”

Previous Mars missions such as the Mars Expedition Rover Spirit have filmed dust devils and the tracks they leave behind, where the devils scour away the planet’s loose surface soil to reveal darker rock below. When these tracks accumulate over large regions, Lorenz said, they can cause changes in solar reflection “which may cause year-to-year variations in Mars’ otherwise fairly uniform climate.”

“While on Earth dust devils are generally just an occasional nuisance and meteorological curiosity,” Lorenz adds, “on Mars, they are major agents of dust-raising, which is a major factor in the climate, and in the operation of solar-powered vehicles on Mars.” [More at links]