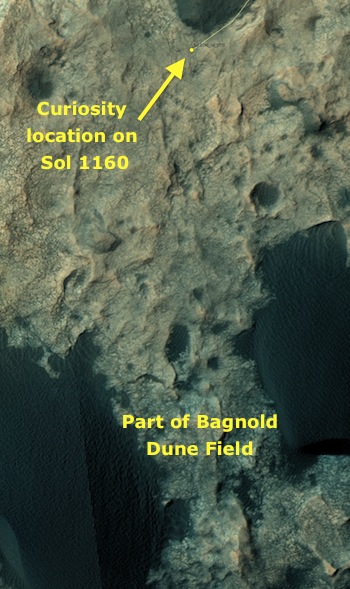 Sol 1162-63, November 11, 2015, update from USGS scientist Ken Herkenhoff: Today is a holiday for some of us, but not the MSL tactical operations team!  The 55-meter drive planned for Sol 1160 completed as planned, and another 41-meter drive is planned for Sol 1162.  Before the next drive, Mastcam and ChemCam will observe a small, sandy drift named “Arris” and a bedrock target dubbed “Tsumeb.”  Mastcam will also acquire two mosaics, one of nearby outcrops and one of more distant rocks.  The drive should place the rover between two of the Bagnold Dunes, so the vehicle will turn to a heading that will maximize the chances of acquiring good REMS measurements of wind speed and direction.  [More at link; map at right created using image on NASA’s Curiosity location page]