Chips off the old block?

Are Martian moons Phobos and Deimos escaped asteroids, as sometimes proposed? Robert Craddock (National Air and Space Museum) suggests in a paper in the February 2011 issue of Icarus they may have come from a large impact on Mars instead. He calculates that an object with about 1/50th the mass of Mars could have struck the planet early in its history. 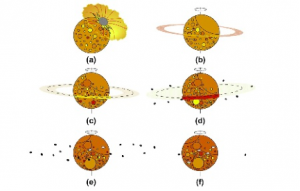 This impact might have blasted out the hypothesized Borealis, Elysium, or Daedalia giant basins. (Or yet another basin, still unidentified.) In his modeling, some of the debris ejected by the blast formed a disk around Mars, with moonlets coalescing within the disk. Deimos and Phobos, he says, may be the last survivors of that process.

This entry was posted in Reports and tagged basins, Deimos, impacts, Phobos. Bookmark the permalink.