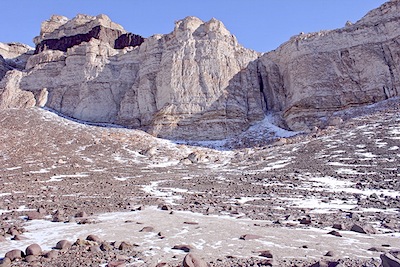 Failure to find active microbes in coldest Antarctic soils has implications for search for life on Mars.

It took Jackie Goordial over 1000 petri dishes before she was ready to accept what she was seeing. Or not seeing.

Goordial, a post-doctoral fellow in the Department of Natural Resource Sciences at McGill University has spent the past four years looking for signs of active microbial life in permafrost soil taken from one of the coldest, oldest and driest places on Earth: in University Valley, located in the high elevation McMurdo Dry Valleys of Antarctica, where extremely cold and dry conditions have persisted for over 150,000 years.

The reason that scientists are looking for life in this area is that it is thought to be the place on Earth that most closely resembles the permafrost found in the northern polar region of Mars at the Phoenix landing site.  (…)

The McGill team analyzed samples from two permafrost boreholes which reached a depth of just 42 cm and 55 cms below the surface. This may not sound like a lot, but drilling into permafrost to get soil samples for testing is very difficult. (…)

The research team carried out a variety of tests, both in the field (where they failed to find evidence of carbon dioxide or methane – a gas used by all living things – in the soil) and then back in the lab at McGill in Montreal. They sent soil samples for DNA testing, looking for matches with particular genes known to be found in microbes and fungi; they tried to stimulate microbial growth on a wide variety of substances and then count the cells produced; and they used highly sensitive radiorespiration activity assays, which involve feeding the soil microorganisms a food source which has been labelled with radioactive carbon, which can then be used to detect if the microorganisms are active.

The tests failed to show any signs of active life. (…)

On a positive note however, the researchers add that this suggests that any microorganisms that may be transported to Mars from Earth by mistake are unlikely to be able to survive on the Martian surface, something that is of current concern for planetary protection.

The report is published in The ISME Journal. [More at links]