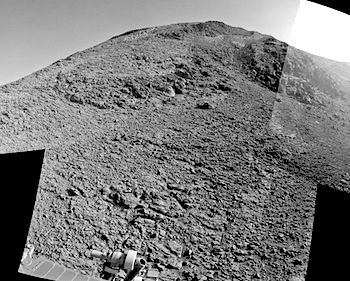 Sol 4270, January 28, 2016; Rover Field Report by Larry Crumpler, MER Science Team & New Mexico Museum of Natural History & Science: On January 23, Opportunity celebrated its 12 anniversary of landing on Mars. During that time we have driven the rover over 42  kilometers across the surface of Mars, seen more terrain, and more sunrises and sunsets on Mars than anyone before. Currently Opportunity is continuing its slow winter on Mars campaign exploring the south side of Marathon Valley here on the west rim of Endeavour crater. Winter solstice was January 3 Endeavour crater is an ancient crater, dating from the time when Mars had considerably more water. Like many Martian craters from this time period, there is evidence from orbital observations that the rocks were altered to clay….that’s how wet it was. Opportunity is the first explorer to have a look at these altered rocks that occur in the rims of big and old craters. [More at link]