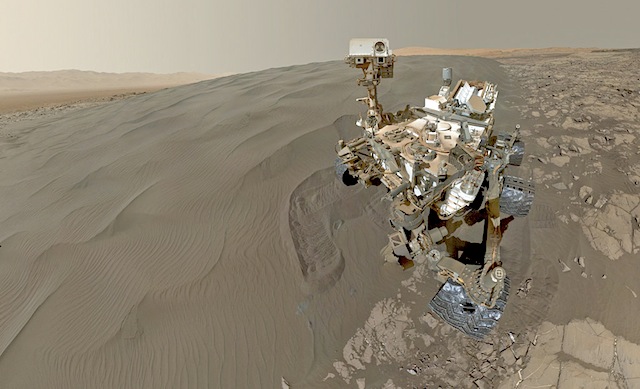 The latest self-portrait from NASA’s Curiosity Mars rover shows the car-size mobile laboratory beside a dark dune where it has been scooping and sieving samples of sand. The new selfie combines 57 images taken by the Mars Hand Lens Imager (MAHLI) camera at the end of Curiosity’s arm on Jan. 19. It is online [here].

The rover has been investigating a group of active sand dunes for two months, studying how the wind moves and sorts sand particles on Mars. The site is part of Bagnold Dune Field, which lines the northwestern flank of Mars’ Mount Sharp.

When the component images were taken, the rover had scuffed the edge of “Namib Dune” and collected the first of three scoops of sand from that dune. It used its scoop later to collect a second sample on Jan. 19, and a third on Jan. 22.

During processing of the third sample, an actuator in the sample-processing device did not perform as expected when commanded. This week, the Curiosity team is identifying possible reasons for the actuator’s performance. (…)

“The rover responded properly to this unexpected event,” said Steve Lee, deputy project manager for Curiosity at NASA’s Jet Propulsion Laboratory, Pasadena, California. “It stopped moving the actuator and halted further use of the arm and sampling system.” [More at links]