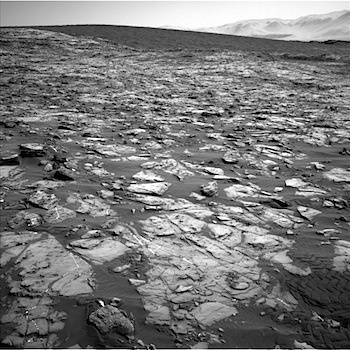 Sol 1244, February 4, 2016, update from USGS scientist Lauren Edgar: Today’s plan is focused on bumping towards a bedrock target to set us up for contact science in the weekend plan.  As we bump forward, we’ll use the rear wheels to create one last scuff in Namib Dune, which we’ll image as we drive away.

I was the GSTL today, and we had a busy morning deciding where to drive to and how to image the scuff that we’ll create.  We decided to bump just a few meters away to a target that will allow us to characterize typical Murray formation bedrock (the intended target is in the lower half of the above Navcam image).  Before the drive, we planned a ChemCam passive observation of a distant crater to characterize the material that makes up the Gale crater walls.  We also planned a Mastcam image of a freshly broken rock named “Askevold,” and Mastcam deck monitoring to search for the movement of fines. [More at link]