Curiosity: RMI does a ‘Take 2′ on distant crater 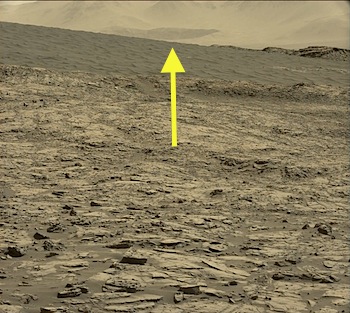 Sol 1244, February 5, 2016. The ChemCam’s Remote Micro-Imager has reshot (above) the interior of a distant impact crater lying at the foot of Gale Crater’s interior wall, west- southwest of Curiosity’s current location. The arrow in the image at right indicates the crater in a Mastcam frame from Sol 1243.

The earlier RMI images (below) were taken on Sol 1222 (January 13, 2016). The framing of the two composite images is not precisely the same. In addition, the latest version shows the dark sands of High Dune looming in the foreground because Curiosity has moved its position during the 12 sols in between. Both RMI images enlarge when clicked; the Mastcam image links to the raw version.

Sol 1244 raw images (from all cameras), and Curiosity’s latest location.