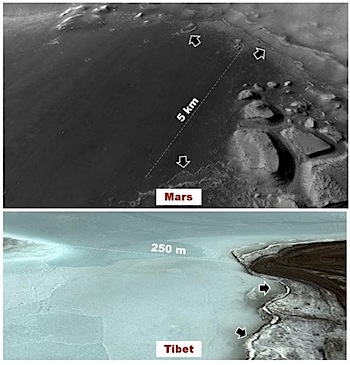 Groundwater circulation beneath a massive tectonic rift zone located along the flanks of some the Solar System’s largest volcanic plateaus resulted in the formation more than 3 billion years ago of some the deepest basins on Mars, according to a new paper by Planetary Science Institute Senior Scientist J. Alexis Palmero Rodriguez.

These basins could have been episodically covered, perhaps during hundreds of millions of years, by lava and water lakes that were discharged from subsurface pressurized sources, Rodriguez writes in “Groundwater flow induced collapse and flooding in Noctis Labyrinthus, Mars” that appears in Planetary and Space Science. (…)

“The temperature ranges, presence of liquid water, and nutrient availability, which characterize known habitable environments on Earth, have higher chances of forming on Mars in areas of long-lived water and volcanic processes,” Rodriguez said. [More at links]

This entry was posted in Reports and tagged astrobiology, groundwater, lakes, Noctis Labyrinthus. Bookmark the permalink.