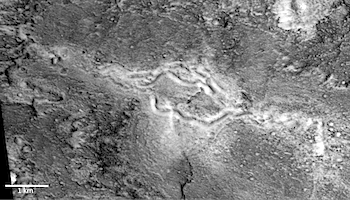 Planetary Geomorphology Image of the Month, February 29, 2016: Colman Gallagher (University College Dublin). Eskers are sinuous ridges composed of deposits (Image 1) laid down from meltwater flowing in tunnel-like conduits beneath glaciers (Image 2). On Earth, eskers are common components of deglaciated landscapes (Image 3) but eskers also can be observed emerging from the margins of intact glaciers.

Sinuous ridges exist on Mars and several have been interpreted to be eskers. However, none of these previously identified possible eskers is associated with an extant glacier. This is not because there are no glaciers left on Mars – actually, glaciers are common across the mid-latitudes of Mars. However, these present-day martian glaciers are thought to be incapable of producing sufficient meltwater for eskers to form within them. This is a consequence of both the present climate and, therefore, the glaciers being extremely cold. Hence, previously observed isolated sinuous ridges interpreted to be martian eskers are thought to have formed beneath melting glaciers that existed in earlier, warmer periods over 3 billion years ago (3 Ga) but which have long since disappeared. [More at link]

This entry was posted in Reports and tagged eskers, geomorphology, glaciers, sinuous ridge. Bookmark the permalink.