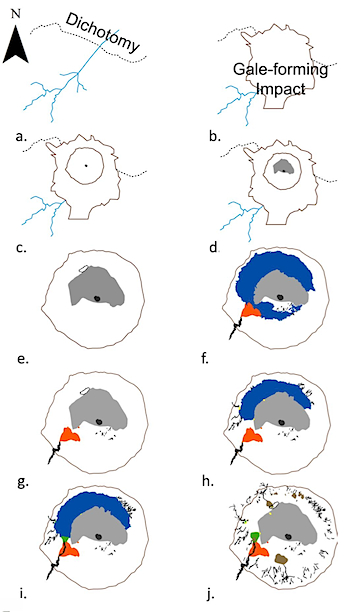 A cartoon representation of a plausible hydrologic sequence within Gale Crater since its impact.

The sequence and timing of transient lakes in Gale Crater are important to understanding the delta deposits found by Curiosity on Gale’s floor. Writing in the Journal of Geophyscial Research, a team of scientists led by Marisa Palucis (California Institute of Technology) suggests an outline of lake history.

“We propose there were at least three major lake stands within Gale, each persisted for thousands of years, and all occurred after Mt. Sharp reached close to its current topographic form,” they write.  “Deltaic deposits off the southern rim of Gale, derived from incision of Farah Vallis, and corresponding deposits off the southern flank of Mt. Sharp define the highest lake level, which had a mean depth of 700 meters.”

The scientists present evidence for two lakes subsequent to the first, one of them 300 meters deep and the second 400 meters deep. Then, they say, “post-lake, reduced hydrologic activity continued, evidenced by a time of fan building (including Peace Vallis).”  The team concludes, “The sequence of events suggests an episodic shift through time from relatively wet regional conditions to a drier environment with local runoff.” [More at link]