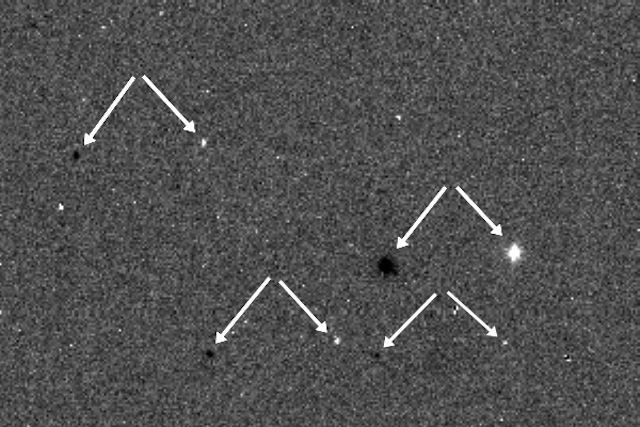 In the weeks following liftoff on 14 March, mission operators and scientists have been intensively checking the Trace Gas Orbiter (TGO) and the Schiaparelli entry, descent, and landing demonstrator to ensure they will be ready for Mars in October. (…)

“All systems have been activated and checked out, including power, communications, startrackers, guidance and navigation, all payloads and Schiaparelli, while the flight control team have become more comfortable operating this new and sophisticated spacecraft,” says Peter Schmitz, ESA’s Spacecraft Operations Manager. (…)

On 7 April, TGO’s high-resolution camera was switched on for the first time, acquiring its first images of space.

The view shows a randomly selected portion of the sky close to the southern celestial pole. This image is composed of two frames taken in slightly different directions by using the camera’s rotation mechanism. Subtracting one frame from the other reveals a number of equally offset positive and negative images of stars… [More at link]