Is super-resolution restoration the future of high-resolution Mars orbital imaging? 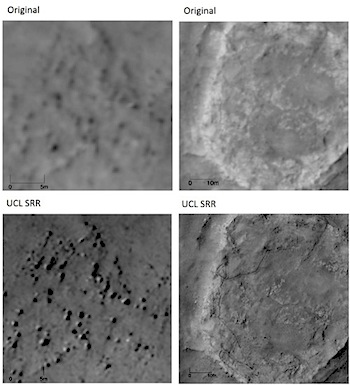 An online posting at the Beautiful Mars blog by Alfred McEwen (University of Arizona) examines the question of future improvements in high-resolution orbital imaging of Mars both for geological studies and mission operations. The question is prompted by a research paper recently published in the journal Planetary and Space Science. The paper was the subject of a news release by University College, London, where the lead author (Yu Tao) is a research associate.

With NASA looking for ideas for a new orbiter with improved imaging, McEwen outlines the difficulties of gaining higher resolution of the Martian surface than the HiRISE camera (of which McEwen is the principal investigator). HiRISE produces resolution of about 30 centimeters (10 inches), but its images ineviably cover only narrow strips of the Martian surface. While gaining higher resolution is desirable, it faces hurdles, McEwen says. A few of these include: the atmosphere forcing a high orbital altitude, dustiness of the atmosphere reducing image signal to noise, spacecraft pointing stability, the need to track on ground features during the exposure, and so on.

McEwen examines the techniques described in the paper, both for orbital imaging and imaging at the surface (by a rover). Imaging at the surface produces much better “super-resolution” restoration, he notes, because a rover’s camera can take a sequence of images that vary only slightly in pointing. The super-resolution image processing technique described in the paper can extract details from a stack of images that overlap almost wholly.

In conclusion, McEwen notes, “For the highest-priority sites, super-resolution restoration may provide an economical alternative to flying a more capable camera and spacecraft, in order to achieve a modest improvement in resolution (probably no better than a factor of two).”

He adds that while a small drone helicopter has been proposed for NASA’s 2020 rover, “This drone is very limited in range, and can only travel about half a kilometer per day before stopping to recharge, so we need orbital imaging to first find the best places to land.”